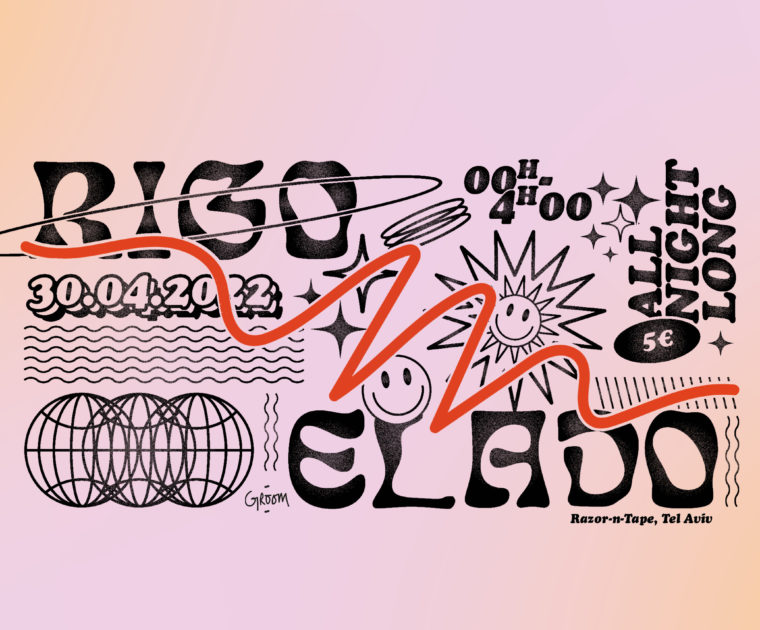 ELADO
Elado’s lifelong love affair with music has long earned him a reputation as a driving force within his home city scene in Tel Aviv. Avidly collecting records for three decades and DJing for the best part of two, in 2020 he stormed the edit world as his kaleidoscopic palette were heard for the first time through productions on globally-renowned, prominent labels, including Brooklyn-based label Razor-N-Tape.
Catching the music bug from an early age, he took influence from his father who was also a wax enthusiast and had amassed a huge collection of disco records. Elado’s earliest memory of his love for music is vivid, as he recalls his father gifting him a recorded cassette which he rinsed to the point of it meeting a premature end, and he reacted hysterically until his father agreed to make another. By his early teens he’d begun feeding this need to curate and connect tracks by putting together his own mixtapes, and he’d quickly progress to DJing at his father’s parties, soon realising that this could be a vocation.
A trip to Amsterdam in the nineties further set the wheels in motion. Across the next twenty odd years Elado would become a master manipulator in turntablism and a much-touted tastemaker, fully immersing himself in Tel Aviv’s vibrant nightlife, including a residency at hallowed haunt The Block. Armed with a custom-built rotary mixer from Condesa Electronics, he utilises his musical instincts with rich DJ sets that see him seamlessly weave through breakbeat, electro, disco, house & lost grooves from all over the globe.
In recent years his colourful worlds in sound have reached Europe, with revered Canadian icon Eddie C booking him for his Berlin debut. Gigs at Berlin’s ://about blank, Salon Zur Wilden Renate and Bohnengold followed, and beyond the German capital, he has graced the decks in Switzerland and Croatia.
For many years Elado has been an ardent edit enthusiast. He fervidly digs for wax in parallel corners of Europe and South America for the purpose of sourcing obscure, vintage cuts to chop and edit. Until 2020, giving tracks a rerub was a private pursuit with none being released, but as with many artists, the pandemic afforded him time to hone his craft. His genre-melding, globe-trotting debut productions on Eddie C’s Red Motorbike and revered New York imprint Razor-N-Tape put him on the map as a rising star of the edits, with him clocking peer support from Antal, Jacques Renault and Folamore, among more. From downtempo folk to peak time disco and banging acid, the productions are carefully crafted with the intention of amplifying club nights from beginning to end as he is intent on reaching a point where his whole set is exclusively his material, and he’s already halfway there.
A busy release schedule for 2021 brings his set ambitions closer to completion. His distinctive editor’s touch will be heard via Swedish label G.A.M.M, Brazilian outpost Barefoot Beats, Portugal imprint Bonfido Disques, Glasgow-based Secret Squirrel, and an anticipated reappearance on Razor-N-Tape.
► Liker : facebook.com/eladomusicofficial
► Ecouter : soundcloud.com/eladomusica